well, not really, I am behind on my chores though. Primarily due to not having enough equipment put together to manage 4 hives.

I scheduled the extractor rental for the last weekend in october. I need to go by my hives this weekend and pull off honey supers..which should have been done a few weeks ago.

Now, I need to recruit helpers and a place for extracting. Now that my mentor lives in the boonies, I need a place to do the extraction. I am halfway tempted to go rent one of those storage units 1) to place all my beekeeping gear in it year round, as well as 2) to perform the extraction there. hmmmm. another thing for my to do list.
Posted by krista at 7:28 PM No comments:

my honey at husky deli in west seattle 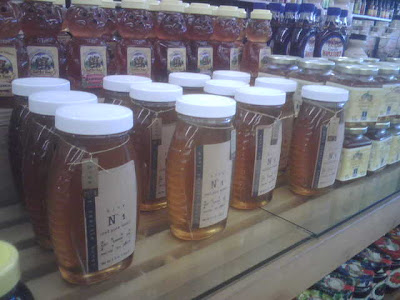 This past weekend my beekeeping mentor moved his hives to his new residence...but not without assistance, which I truly owed him due to all his help to me. However, since I was recouping from recent surgery, the only assistance I could provide was the help in recruiting two strong and willing participants.
With extra beesuits in hand we arrived at Tim's old house on Saturday morning. We proceeded to his "backyard", which consists of a deck with an awesome view of seattle...and overlooking a very steep hillside, declining from his house, and where his bees live.

Since Tim is very experienced in managing the hives in this location, he had a contraption built on his deck which he'd previously used to hoist honey up to his house. Very ingenious and made the work of moving the hives as painless as it could get. (Of course, I was only observing. The sweat drenching the backs of those moving the hives was very apparent).

Here are the pics of the adventure of getting the hives into his van for the long journey to his new home. 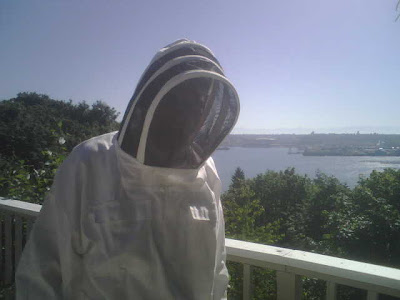 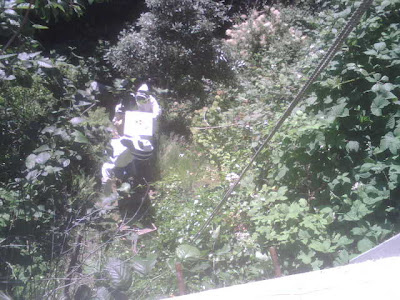 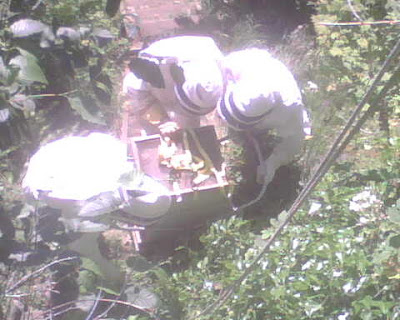 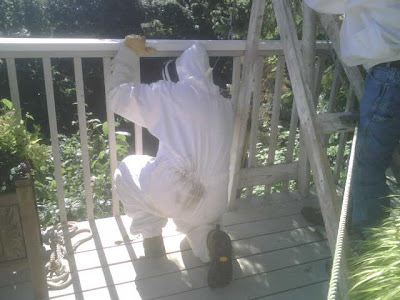 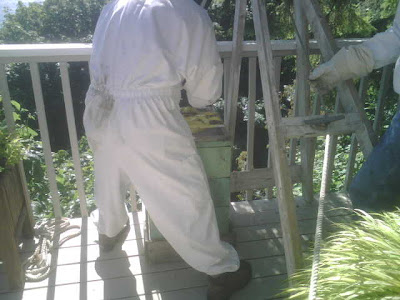 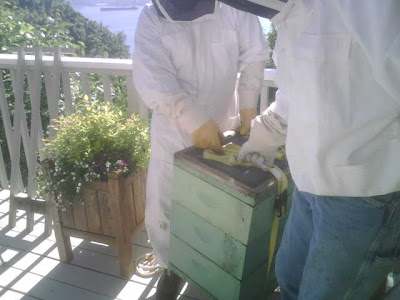 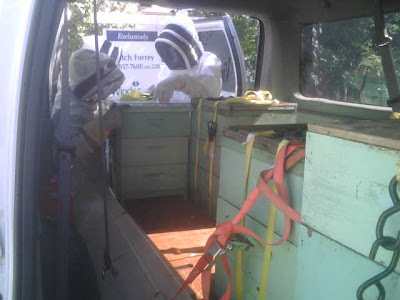 http://www.vanishingbees.com/
great little film and information on ccd and the state of our bees. check it out.
Posted by krista at 10:23 PM No comments:

been so busy I haven't had time to post.
The four hives are going well...the admiral hive lost its queen but then the hive created a new one. Last week's check indicated the queen is laying, so it is back on track now.
The two queen anne hives are moving along nicely, given they were started with drawn comb. I have them up to 4 boxes high now. The admiral hive and vonveyville hive are only three boxes high now.

This weekend should prove exciting. My mentor is moving his bees. I've recruited some strong backs to assist in getting the hives up his steep hill. I will be sure to take lots of pictures.
Posted by krista at 9:51 PM No comments:

I now have 4 hives, two in the same location as last year (queen ann) and two in west seattle- different properties.
Last sunday was decently warm so I checked all 4 hives...saw eggs and brood in all four, and got a visual on the queen in the von veyville hive (property name). This one I was particularly worried about since I received a call last week saying ALL the bees were outside the hive. Upon my arrival I found a big cluster of bees hanging out beneath the hive, sitting on the cinder block which I used to support the hive.
I gently scooped most of them in a bucket, but quickly realized that the majority were UNDER the hive, down in the cinderblock, not just on the outside of it...this was likely where the queen was. I feared that I would kill her in my scooping, but had little choice. I eventually took the hive apart, off the cinderblocks and got them all dumped back in the hive. I assumed I got the queen as they stayed in the hive. Thankfully, having gotten to see her this past sunday confirmed I didn't squash her in my bee rescue.
This was a time that it would have been good to have one of those bee vacuums my mentor had used for swarm catching. AND, It just so happens that a fellow condo dweller threw away one of the 5 gal watercooler bottles needed for a beevac. I will convert it after some thrift shop scavenging for parts.

Here are some pics of the hiving of the admiral hill hive- my friend's boys are pictured as I am telling one of them to shake the bees out of the package/cage. 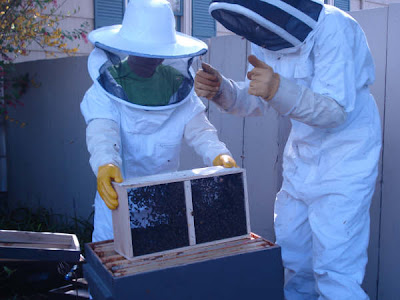 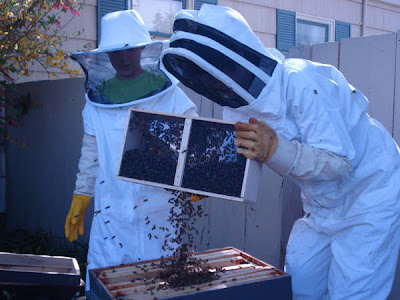 Dumping the bees out of the cage 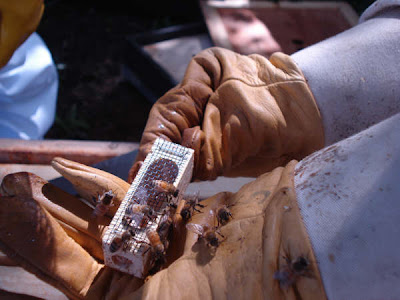 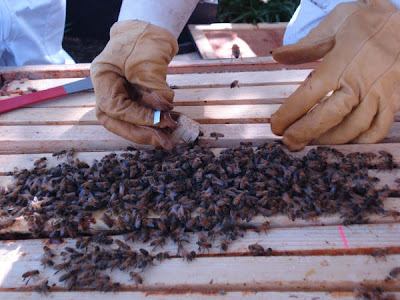 Putting the queen's cage in- left in for a day so the bees get used to her pheromones.
Posted by krista at 10:48 PM No comments:

You should check this out

I've been getting ramped up for this season of beekeeping. I finally inspected my two hives from last year. Neither made it thru the winter, appeared as if the bees didnt survive the cold as there was no evidence of rampant disease or lack of food. In fact, I found about another 150 lbs of honey in the hive which I purchased last december.

Today I spent the day cleaning this hive as it had not been tended to in a while..the frames were basically glued together with wax and propolis. It was quite a chore, scraping and hacking away at the gunk..and then I had to move the 4-5 boxes of honey (~30 lbs each).

This year I am hoping to have three active hives: two in the same location as last year, and one at the top of the hill here in W. Seattle. A friend and her two boys (both 10 yrs old) are wanting to learn. They seem to be maintaining their interest level, which is fun to see, and, I 've been giving them some homework, like mixing up the feeding syrup.

This year will also bring more work as I am going to be supplying honey to a local deli - in place of my mentor as he is moving from the area. So, I guess you could say I am going commercial.

will update once I get news on the arrival of the girls.
Posted by krista at 9:00 PM No comments:

A new adventure in bees.
In researching what it requires for my condo bldg to have a certified backyard habitat, I got to thinking about orchard mason bees. I thought it would be cool to install some in our backyard area, or even just have them on my deck.
While mason bees don't produce honey, they are pollinators and would satisfy one of the checkboxes of the backyard habitat- providing a place for living creatures to nest/live.

SO, I just ordered an orchard mason bee "house" and some bees- they come in pods, not yet active...which I thought was interesting, we will see what I end up with. Apparently the bees have a much longer life cycle than honey bees.

Here's the site I ordered them from...knoxcellars it is local- in washington, but there were many other options for online ordering if you are interested. Also, you can simply make your own orchard mason bee nesting block by drilling some holes in a block of wood (dimensions matter so do a little research online before you do this http://www.ars.usda.gov/Main/docs.htm?docid=10743) and then hanging the block up outside in your yard. Some local orchard bees might find their way into the nest and voila!
I just wanted to go the surefire route of ordering some bees to start with.

Here is a really good article telling everything you wanted to know about orchard bees.
http://www.sare.org/publications/bee/blue_orchard_bee.pdf

Oh and, mason bees don't sting or rarely sting!
Posted by krista at 3:38 PM No comments:

I have wondered about this for a while, and while this article doesnt necessarily answer the question all that well (in my opinion), it raises some questions you might want to ponder with regard to labels you see on honey and all foods.
Posted by krista at 3:36 PM No comments:

From this month's edition of the puget sound beekeeping club's newsletter:

Honey Bee Fun Facts
• Honeybees are the only bees that die after they sting.
• Honey speeds the healing process and combats infections.
• Honey never spoils.
• It would take about 1 ounce of honey to fuel a honeybee's flight around the
world.
• Honeybee colonies have unique odors that members flash like ID cards at
the hive's front door, so the guard bees can recognize the entering bees.
• While foraging for nectar and pollen, bees inadvertently transfer pollen
from the male to the female components of flowers. Each year, bees
pollinate 95 crops worth an estimated $10 billion in the U.S. alone. All told,
insect pollinators contribute to one-third of the world's diet.
Posted by krista at 11:57 AM No comments: 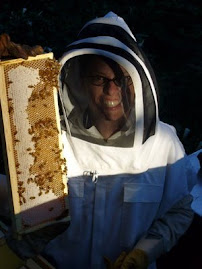